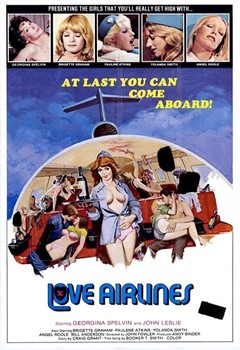 Description: Veronique Maugarski and Erika Cool are meant to be girls from Sweden who go to Paris and see an advert for air hostesses – no experience necessary. The airline seems to be selling mile-high club experiences. The in-flight movie is a porn film and the hostesses have sex with the passengers and the female pilots with each other. The passengers include an Arab sheikh, two “American” men in cowboy hats, an old millionaire and a swinging couple, plus a man who only wants to sleep (Jean-Louis Vattier). There are flashbacks to the previous sexual encounters of the passengers.
We see the couple having sex on a bed and the wife looking bored and then having sex in the cellar of a bar where the wife sees a poster advertising these flights. On the plane she sucks off her husband and then goes round the rest of the passengers.
The cowboys are fond of practical jokes. They pick up a prostitute (Cecile Carole) and take her back to their hotel room where they have rigged a bucket of water to fall on her head as she enters the room first.
We see the sheikh and two of his harem (Sophie Bulle, XNK0073) in a hotel.
The millionaire has a permanent erection but can’t cum and we see a couple of females hired by his doctor to try to bring him to a climax. The blonde (Carole Gire) arrives at a posh doctor’s consulting room to take over from an exhausted brunette (Maryline Guillaume, whom we don’t see in action) and then gets exhausted herself as she fails. The millionaire hopes to achieve an orgasm if the plane goes high enough and when that height is reached the three hostesses leap on him. Success is the trigger for a free for all, including the arab asking to bugger someone – the male in the swinging couple volunteers. 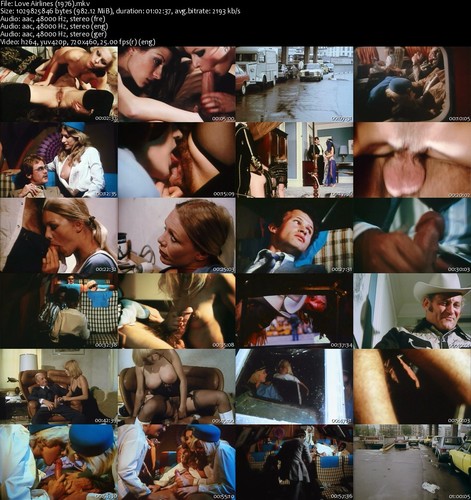