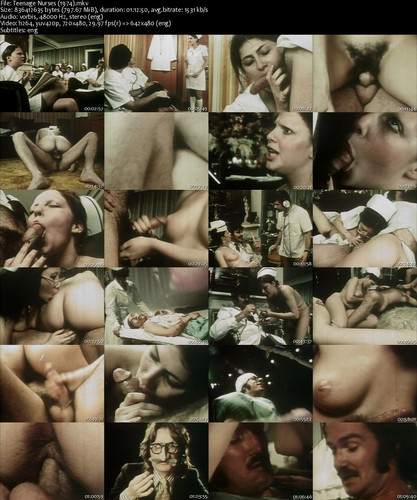 Description: The world’s first Vaudeville/Musical/Porno Movie. Doug Collins and Avind Harum had made a hilarious but unsaleable film called, “An American in Bethesda”. Viet Nam vets in the Bethesda VA Hospital are entertained by various Vaudeville performers; comedians, tap dancers, singers, Adagio Dancers with a 12 foot python, etc. During the show, the patients, including one amputee, have sex with the hospital’s nurses. Doug couldn’t sell this thing to anybody so Bill Markle and I bought it, added some more sex scenes, a laugh track, and sold it to Teddy and Tom, the Greeks who owned the Capri Theater as, “Teenage Nurses.” Audiences were horrified, the Greeks were pissed, and Al Goldstein said the following about Teenage Nurses, “Pornography loses its innocence, and succumbs to moral rot in this puker.” I thought I had died and gone to heaven.