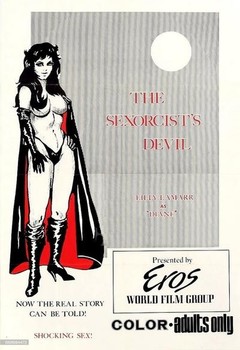 Description: A.K.A. The Sexorcist’s Devil/Undesssed to Kill. A female reporter for an occult magazine investigates a story about a murderous devil cult. Done in a documentary style, Diane is a reporter researching an article for an Occult magazine, and decides to accompany “occult expert & Sexorcist*” Dr. Von Kleinsmidt to “The Marsh” {a blighted (super) natural wilderness akin to The Devil’s Canyon}, a dangerous environment steeped in nefarious superstition about a “sex-crazed Devil worship cult” supposedly performing rites of darkness out there, until he comes upon a mysterious box containing parchments, which he takes back with him to his study for translation. Unbeknownst to him, while he does so, he unwittingly calls forth a “perverse disciple of The Devil” named “Volta” {Wayne Williams} who takes possession of Diane’s friend Janice, a prostitute he uses to seduce and kill everyone around her while taking his pleasures as well. He initiates her by bestowing a pendant displaying “Set” upon her, while together uttering “Hail Satan!” with uplifted Cornus. When Diane becomes suspicious after a phone call to Janice, she returns home to find her afflicted with a demon trying to possess her, but it is all a ruse, and surprisingly, she is also dispatched, as is her pimp, but not before Von Kleinsmidt is alerted, who attempts to battle these “evil spirits” by using passages from The Goetia {The ‘Lesser Key of Solomon’, a blindlight tome by a blindlight author, who was subservient to the mythological Jehovic god}, admonishing demons to submit, yet because of Volta’s quick efforts {with a gesture used by Crowley to signify horns on the sides of the head}, manages to materialize a knife in the hand of the possessed Janice, who stabs Von Kleinsmidt to death. A smiling Volta proclaims success, that Satan’s will has been fulfilled, and walks back into the wilderness. {Hypothetically, “We Win!”} Mentionable are some of the intriguing paintings in Von Kleinsmidt’s office {Satan arising, embracing a witch; a Reaper goosing a Lilithian witch holding a serpent, perhaps representing the kundalini; a demonic beast tearing prey limb from limb; and a portrait of the setting sun in The West}, which do resemble Dr. LaVey’s style, and the recurrent appearance of an image of a lion resembling Togare. 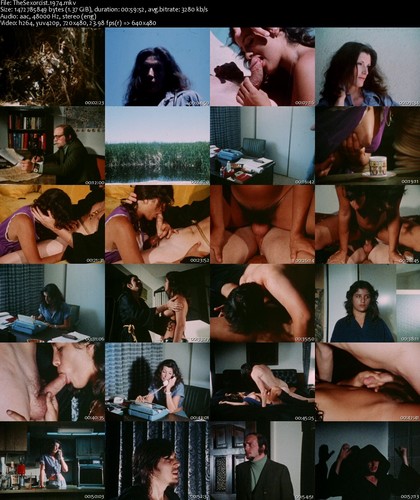