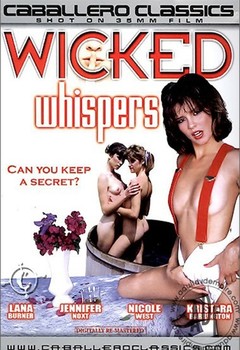 Description: A partial list of the pluses of this 1980s classic release, Wicked Whispers, are buff dudes, real boobs, realistic sets, palpable enjoyment during the fucking (including titty fucking – not something you see in many pornos anymore), amusing hairstyles and inane sex dialogue like: “You want that dick real bad, don’t you? Suck it like you want it, ’cause you want to fucking suck on it, don’t you?” Not to mention the hilarious, often after-school special-like, ’80s soundtrack. Who could ask for more? But there is indeed more, like Peter North, for example, and some hot girl/girl scenes in addition to the hetero bang fests. Cast: Kristara Barrington, Nicole West, Lana Burner, Jennifer Noxt, Tiffany Blake, Peter North, Tygar Bennet, Greg Rome, Craig Roberts, Mark Wallice.